Razer Blade 14 is one of the most powerful 14-inch gaming laptops I have used. This small portable amazing machine contains features that many large, powerful laptops don’t have. There is too much power enclosed in a small box. But if the package is small, the question arises whether the company has excluded some features and functions to reduce the size and weight of the laptop to make it highly portable or not. In this blog, I’ll share all the information about the machine after using the latest Razer Bladed 14 for a week. 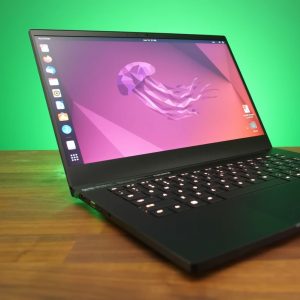 Razer Blade 14 is a slim, portable laptop that will provide you with highly professional specifications and a compact size. Razer Blade 14 is not cheap, but if you are a gamer, it will become your super choice because it comes with a powerful processor, Ryzen 9 5900HX, and Nvidia GeForce RTX 3080 graphics.

‘When we compare the Windows-based gaming laptop, Razer laptops always provide the best quality build and material to give users a super luxury feel. Razer Blade 14 has a solid metal CNC aluminum chassis that feels great.

A black anodized finish with a green Razer logo lights up, and we have the option to customize the light between on, off, or breathing.

The black finish of the laptop is beautiful, but there is a slight problem with it. Whenever we touch it, it leaves fingerprints. We can easily clean those fingerprints with any microfiber cloth without any extra effort. I think this is a minimal cost for the premium look it provides.

The hinge motion of the laptop is fantastic. It is sturdy and provides a tremendously satisfying experience while moving the lid. Moreover, when we close the laptop lid, we hear an excellent snap sound which provides a lovely feel. I did not find much flex in the keyboard or metal lid, and it is because of excellent metal build quality.

This latest Blade 14 (2022) release contains a MUX switch, which means you can disable Optimus to acquire a super boost in games. The only drawback of this feature is that it will drain the battery if the power is unplugged.

The colors of the screen are pretty good for gaming. However, I think the screen’s contrast needs a slight improvement. The new Blade 14 has the same panel as last year’s model. Hence the response time of both models is similar.

We can use FreeSync, Optimus, and Radeon graphics to remove the screen tearing. The significant improvement in this model is the integration of the MUX switch because it improves the laptop’s overall response time, especially in games where speed and accuracy matter a lot.

The camera of the Razer Blade 14 is 1080p. It has an IR feature required to unlock the laptop with an entering password. It will detect the face and allow the user to log in.

The Razer Blade 14 keyboard provides an amusing clicky feel. The keyboard is an RGB backlit keyboard. We increase or decrease the brightness level with the help of F10 and F11. The keyboard looks incredible when all the keys of the keyboard get lit up. If anyone wants to customize the lighting effecting of the backlit keyboard, one can do so by using Chroma Software.

The laptop’s touchpad is broad, providing an accurate and smooth experience. It is user-friendly, and we can click it down at any point.

I think Wi-Fi performance is the same as MediaTek and RealTek options. I found a slight problem connecting to the Wi-Fi modem, but when I restarted my laptop, it started to work fine. I think there was a bit problem with the driver. After updating the driver, I hope I’ll not face the issue again.

The Razer Blade 14 comes with a 1TB SSD. The performance of  SSD PCIe Gen 4 NVMe M.2 is excellent. The laptop has one slot for Solid State Drive. If we want to upgrade the SSD, we will re-install the windows in the newly upgraded SSD.

The laptop comes with a super-efficient cooling system. It has two fans, and the back of the laptop is equipped with a vapor chamber. The fans intake the air from the overhead vents and exhaust out from the back.

The cooling capability of the laptop is excellent. The only problem that may arise is the dust accumulation in the overhead vents with the passage of use.

Razer Blade 14 fans offer a lot of customization options. We can customize the fan’s speed or set it to a silent mode using Razer’s Synapse Software. We can also select four CPU modes with the combination of custom GPU modes.

I tested with different custom combinations of CPU and GPU for the experiment. The strange thing during the test was that I could not control the fan when I tried to get maximum output from the CPU and GPU.

But I think that makes sense because, at top performance, the CPU and GPU require more cooling. If the laptop allows controlling fans at this point, the system may not provide stable performance.

The laptop remained cool when placed idle. Then I put it into a stress test. I tested different heavy software, and they could not pressurize the CPU and GPU. I found the warmest CPU in boost mode.

I tried to lower the temperature by setting the fan speed to maximum, instantly reducing the laptop’s temperature. The temperature of the GPU was reduced by 11 degrees and the CPU by 6 degrees.

The balanced mode provided me with the same CPU clock speed when I tested it with custom mode to high, and the clocking of the GPU was not too high. I think it was because of power limits.

When I set the fans on auto-run mode, the GPU ran at 80 watts on balanced mode. When I put the fan to the highest speed, it lowered the watts to 75. It does not favor much to the CPU. When I tested by setting both CPU and GPU at high, the CPU ran at 40 watts, and GPU was at 95 watts.

Lastly, when I set the CPU to the highest boost mode, it was increased by 6 watts. It removed the power burden on GPU.

I added the result that I got during different performance modes. If you ask my analysis, I didn’t feel any significant change while shifting from other modes.

I got approximately the same score at 1440p with high plus high and high plus boost mode.

The CPU’s power can be increased when GPU is not in use. If we talk about performance, AMD performs much better than intel laptops, specifically with less energy. Hence 54 watts may not be enough for core i7 and core 19 to get incredible performance, but it will be sufficient for the 6900HX 14” smaller machine.

The performance of the CPU is better than the previous version of Blade 14, having a 5900HX processor. If we make a single and multi-threaded comparison, it would be difficult for Ryzen to compete with the latest Intel 12 Gen processor version.

We didn’t see any decrease in the performance of Ryzen when it was running on battery. Still, when we evaluated the performance of Blade 14, we saw a reduction in performance. It didn’t perform as it was performing when the power source was plugged in. Well, I think this could be why its battery timing is good.

I usually on and off test different laptops—I aspect the machine in various ways to take factual information to provide my reader’s authentic reviews.

Whenever I test different laptops, most of the time, when I examine the temperature of the laptop keyboard at rest, it remains close to about 30 degrees Celsius.

When I checked Razer Blade 14 temperature at rest, it also showed a 30 degrees Celsius reading. The WASD When at boost mode, when I was using all the resources of the laptop to get the maximum out, I felt a slight increase in the keyboard temperature.

The palm rest of the laptop is made of metal, so it was slightly warmer, which is, I think, normal.

Now let’s talk about the gaming comparison with other laptops. I test the gaming performance of the laptop with several other models. The game we chose to get the comparison result was Cyberpunk 2077.

The results were a bit surprising for me because Razer Blade 14 performed as the Razer Blade 15 performed. I think it is because both laptops have the ability to run RT 3080 Ti at 90 watts.

I didn’t see a big difference between AMD and Intel processors while playing the game at 1440p resolution. The control of the Razer Blade 14 was better than the others at 1440p.

When I compared the Blade 14 with Asus Zephyrus G14, Blade 14 provided me with a 38% higher FPS. The game I tested prefers Nvidia Graphics as compared to Radeon; that’s why there is a big gap.

On the other hand, Red Dead Redemption 2 prefers Radeon graphics over Nvidia; we can see Asus G14 is much closer to the Razer Blade 14.

Blade 15 set itself to a little higher position, but I think the size does not matter here. If we consider the gaming capability size, I think no one can beat MSI Titan GT77 in this regard.

A 61.6Wh mighty battery powers the laptop. The laptop provides an option of increasing the battery life by reducing the screen’s refresh rate to 60Hz using Razer Synapse software.

I compared the battery timing of the laptop with Asus and MSI. It provides approximately 48% more backup time than the Asus and MSI by only reducing the refresh rate to 60Hz.

if portability is your priority, and you don’t want to compromise on the performance of your laptop, I think this laptop can meet your expectations. The only drawback I found in the laptop is its 16GB memory. Most people consider 16GB a sweet spot today, but people like me who are technology enthusiasts always like to upgrade their gadgets. Besides this, I think the machine comes with amazing specifications for gaming and professional use.