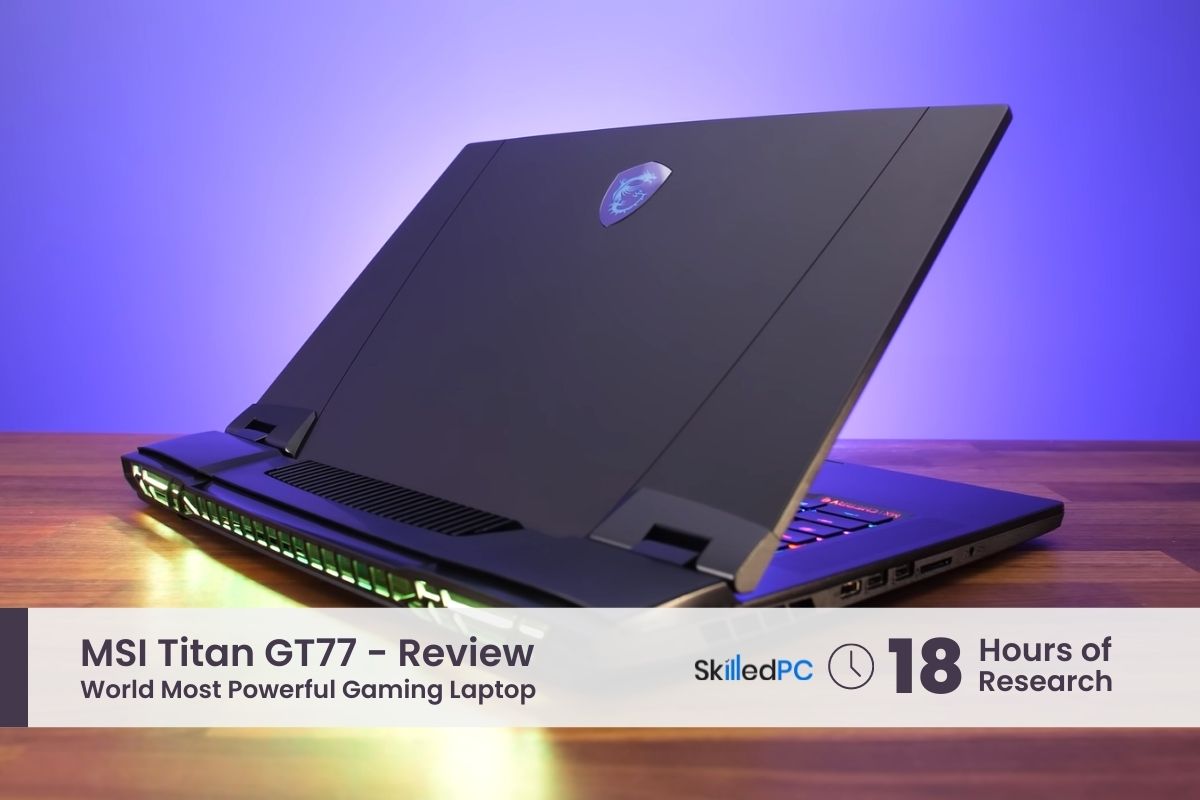 Many people say that the MSI Titan GT77 is the world’s most powerful gaming laptop because this new laptop has Intel 16 core 24 thread Core i9-12900HX powerful processor and has graphics of Nvidia RTX 3080 Ti graphics. Well, the combination of CPU and GPU is quite impressive. But sometimes specifications look good to read, but when we buy a product, it does not meet its promised standards.

To evaluate the specifications and performance of the MSI Titan GT77, I spend more than 18 hours analyzing the machine so that I can provide you with an authentic guide that can help you decide whether to buy it or not. 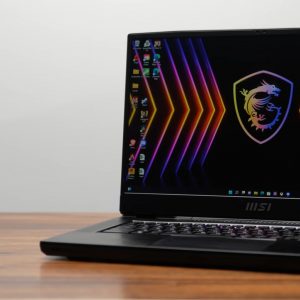 If you are a desktop user and think no laptop can provide the performance like a desktop PC. I must say this MSI Titan GT77 will change your mind. It is a desktop replacement machine. Whether you’re a Pro-Gamer or a Professional enthusiast, the performance of this laptop will blow your mind.

MSI Titan GT77 has the 12th Gen Intel Core HX Processor. HX processors are the latest and most powerful processors. The HX processor used desktop-caliber silicon technology in the laptop mobile processor to increase the performance of a laptop specifically for visual effects and animation.

The performance of the processor is excellent. I run heavy games and video editing software that I usually use on my desktop pc. But I didn’t see any downfall in the performance.

The gaming experience on this laptop was the best experience on any laptop. I didn’t feel any delay or lag in the game. The character animations were extremely smooth.

When I started to use Adobe Premiere, I didn’t feel I was using Adobe Premiere on a laptop. It loaded fast, ran smoothly, and quickly rendered my videos without feeling any extra load. So we can say that MSI Titan GT77 is the portable version of a high-performing desktop computer.

There are many companies featuring Intel’s HX processors but what I found different in this laptop is its RAM slots. This laptop has 4 DDR5 RAM slots for up to 128 gigs of memory, making it much more potent than others.

Another fantastic thing I found in it is its slots for Solid State Drives. Yes, It has 4 M.2 storage slots. We can install 4 8TB SSDs for 32TB of total storage. I think that is enough for the heaviest games like Call of Duty.

The right side has a USB 3.2 Gen 2 Type-A port, two Thunderbolt 4 Type-C ports, mini DisplayPort, HDMI outputs, and an Ethernet port for a stable internet connection.

The power input is on the left side of the laptop. There are two USB 3.2 Gen 2 Type-A ports, an SD card slot, and a 3.5mm audio combo jack.

The laptop possesses a battery of 99.9Wh. Despite the massive size of the battery, I didn’t get fantastic run time. I think the battery timing is less than the other laptops because of the level of the hardware inside. People like me consider the laptop battery a UPS. We cannot rely on a UPS for a whole day, but it can provide an uninterrupted supply of electricity for a few hours.

It has a mechanical keyboard with Cherry MX ultra-low profile switches. The Cherry MX switches are popular for playing games or typing a memo. It provides a great feel while typing or playing the game. People like me always prefer laptops with mechanical keyboards because of their tactile function. The tactile sound offers mental satisfaction while pressing the keys of a keyboard.

The RGB lighting is another unique factor I found in the laptop. It provides excellent RGB lighting. People like me are not too fond of such lighting, but everyone has a different taste. Today our young generation loves such lighting and spends a lot of bucks on accessories to get RGB lighting. So, I think this feature will be much more amusing to youngsters and gamers. If you love playing games on your laptop and are passionate about RGB lighting, this laptop is a gift.

The laptop comes with a 4K 120Hz screen. When I played Red Dead Redemption 2  on this machine, it provided the crispest details of the characters. If you are gaming enthusiasts and (1920 x 1080 px) does not amuse you, I must say that you will get the desired quality from this laptop.

When we are going to buy a laptop besides its features, the essential thing that matters a lot to us is its performance, how a machine performs under pressure.

We usually do not expect such kind of results from a laptop computer, but the result I got in the test was surprising. In the past, we got such results from our desktop PC’s between core i7 and core i9 processors.

When we tested Cyberpunk 2077 on various laptops, we got different results. We compared the laptop with others. We wanted to check why there is too much hype about this laptop?

The result puts the GT77 at the top of the list. We were amazed because it was the highest result we got from a laptop. MSI beat the MSI. The computer that secured the second position is MSI Raider GE 76, also an MSI product.

MSI Titan GT77 is only about 5% faster than its predecessor MSI GE76, but I think there are many more things to compare. GT77 almost doubles memory, doubles the storage, and has a lot more CPU cores and threads. It means that GT77 is not limited to gaming only. It can be used for much more professional tasks.

On behalf of the previous result that I found during various tests, I can safely say that the GT77 should be capable of having a smooth experience of running games at 4K. I didn’t test 4K games on it, but I am saying this on experience-based because I already played such games on a much thinner laptop with lower CPU and GPU power limits, so it is obvious that GT77 will perform much better than those.

MSI Titan GT77 has excellent features for people who love gaming, but can this laptop be a great choice for professional work? To find the answer, I tested the computer using Adobe Premiere, which most professional video editors use for their projects.

The result surprised me because MSI laptops secured all the top three positions, and GT77 again notched the 1st position in the test. This test proves that GT77 is not only a gaming laptop. This machine is not coming slow for professional work.

I usually check the laptop’s cooling system by putting a heavy load on it. I installed and opened Adobe Premiere and Adobe After effects software at once, but the computer remained calm, and its performance did not decrease.

Then I installed Cyperpunk 2077 on it and played with high graphics settings, but it didn’t raise the laptop temperature again.

I opened the laptop case to check how it could provide such efficient cooling, and I got the answer. In this machine, four fans are installed to keep its temperature down. The performance of the fans is quite good. I tried to raise the machine temperature by putting a lot of loads, but it didn’t increase the temperature.

Another reason I understand for such good cooling is its phase change thermal pad covering both CPU and GPU. This thermal pad is like liquid metal. It usually remains in a solid state, but when the temperature of the laptop increase to 45 degree Celsius, it starts to melt, filling the gaps between the chips and the cooler. So, I think that is why the laptop remained cool and calm while playing even demanding games.

I explored the BIOS of MSI TItan Gt77. I found that MSI’s BIOS offers more customization to the users as compared to the other models. I found a lot of customization options like power and thermal limits. I discovered that Intel’s HX chips are unlocked, so overclocking in the this MSI model is possible, so again gaming enthusiast will love this feature.

When I loaded both CPU and GPU simultaneously in a stress test, I found that GPU ran at 170 watts, and the CPU sustained 75 watts. I think that’s a lot more power than the other laptops.

When I read the laptop’s specifications before buying it, I assumed it would be as thick and heavy as the other gaming laptops. But actually, it’s not as thick as I thought.

Well, I feel that I would recommend this machine to those people who love to work on a desktop computer and they think that such kind of performance is impossible on a laptop. MSI Titan GT77 is a desktop replacement laptop.

If someone is looking for a combo of performance and portability, GT77 can provide you with both. The good thing is this machine provides an excellent upgrade option compared to the other laptops out there. It gives a lot deeper parts compared to additional 17″ laptops, but despite having such hardware, it’s not that thick which is excellent. With the release of GT77, I can say that we have entered the era of portability, in which laptops will overcome desktop computers.