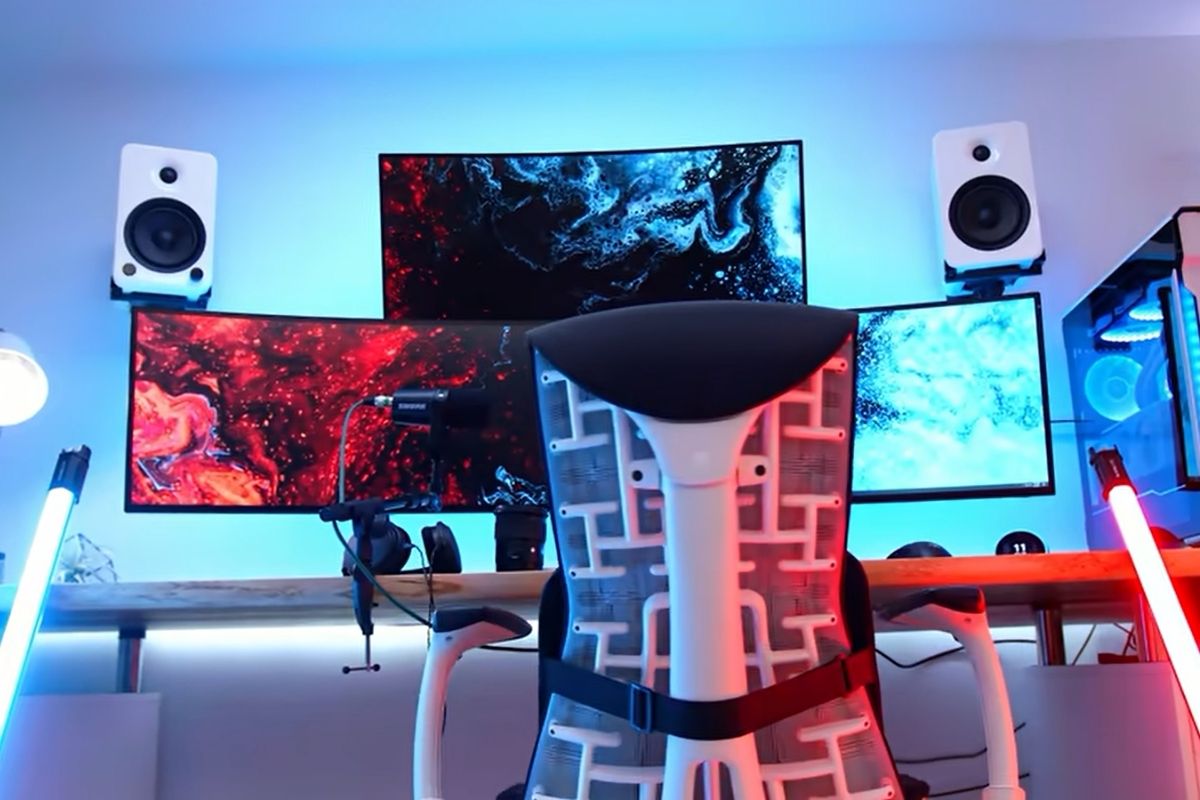 Tilted keyboards on the Profession Counter-strike: Global Offensive can make you wonder, why do pro gamers tilt their keyboard? Seeing a pro gamer playing on the titled keyboard can make you think that it’s just for style, or it actually helps them with the game.

Why do  Pro Gamers Tilt Their Keyboards?

In the past, the pro gamers participated in the ConterStrike esports events with their bulky systems and CRT monitors. The matches were conducted through LAN, and the hosts were not as well-organized and well-equipped in the past as they are today. The biggest issue faced by the Pro gamers in those days was the desk pace.

A whole team of 4 to 5 players had to adjust their systems on a single desk. Since the mousepad is one of the key parts of a gaming setup, players always tried to create more and more room for it. This made them tilt their keyboards to the side to create extra space for the mousepad.

What Is Pro Gaming and eSports?

In Pro gaming, people are more concerned about maximizing their advantage. In the late 2000s, gaming became popular, and many hobbyists started to participate professionally in gaming events. The gaming events organized before 2010 were not official but commercially successful. After 2010, the gaming events were organized officially, and the competitive play became something like international sports events of football, hockey, and baseball.

Pro gamers participate in these events as teams and get sponsorship deals on winning a tournament or league. Therefore, they always try to maximize their chances of winning and look for the smart solution within the available resources. Some of the common reasons why pro gamers tilt their keyboard are:

The biggest perk of tilted keyboards is that they help you save a lot of space on the desk. The pro gamers tilt their keyboards at international events and tournaments to create extra space for mouse movement. The gamers have customized desks at home, and there is no need to tilt the keyboards while paying for the home. However, in events, gamers have to share limited space with their teammates, and a tilted keyboard helps them conserve a lot of space.

Dedicated gaming keyboards are usually large in size. In professional gaming, quick navigation is key to winning a league. Due to complex button mapping, pro gamers find it difficult to quickly move from one key to another. The large-size keyboards sacrifice ease of navigation but come with dedicated gaming features. Therefore, a tilted or adjusted keyboard is helpful to make the keys easily reachable.

The altered angles help the gamers to reach more keys in less time. If you have smaller hands, tilt the keyboard a little bit and see how much area your hand can cover on a tilted keyboard. Another perk of tilting a keyboard is that it makes one-handed gaming easier. The gamers can access more keys with one hand and can keep the other hand free for mouse movement.

Some pro gamers tilt their keyboards just because they find it comfortable. The easier access to navigation keys and dedicated buttons makes it quite comfortable for a long gaming session. Wrist strains are a common issue gamers face when participating in a long gaming session.  A slightly tilted keyboard may help you improve your posture and result in less wrist strain.

Tilted keyboards have their own pros and cons. The most significant downside of tilting keyboards is that it makes specific inputs difficult to access, negatively affecting performance. Moreover, many gamers find it helpful to improve their gaming performance with tilted keyboards. The old-school gamers who have been playing on tilted keyboards for a long time find them quite beneficial.

Nowadays, many gaming keyboard manufacturers have introduced space-saving tenkeyless and 75% keyboards, and therefore new gamers do not prefer to tilt the keyboards. Tenkeyless, 75%, and 60% gaming keyboards come with dedicated gaming controls and advanced button mappings making them pretty famous among the new generation of gamers.

In modern eSports events, pro gamers always do not tilt the keyboard since they can find many ergonomic alternatives. Also, the event organizers have a better approach these days, and therefore they are more focused on the gamer’s concerns. The gaming systems are not as bulky as they were in the past. Having said that, desk space is not a big issue in international gaming events, and therefore, pro gamers do not always tilt their keyboards.

Does Tilting Your Keyboard Help You Improve The Game?

Since it is fascinating to see pro players playing on tilted keyboards, a common perception is that it helps them become better players. However, tilting keyboards does not necessarily help you become a better player. You can tilt a keyboard to enhance navigation and comfort, and in this way, it has a positive impact on your performance.

However, pro gamers practice hard to learn how to play on keyboards tilted at certain angles. Also, the players who have gotten used to it over the years of competitive play find the tilted keyboards pretty helpful in improving their performance.

Why Shouldn’t You Tilt The Keyboard?

If you are not a professional player, there is no need to play on a tilted keyboard. You can look for a larger desk or a tournament-style keyboard to create extra space for a mouse and other peripherals. Also, playing on a tilted keyboard can lead to posture issues. If you keep your wrist cocked to sideways for a long session, it may lead to excessive strains. Also, one-handed play can cause the body aches on either side of your body.

A tilted keyboard is better for gaming in many ways. A tilted keyboard helps you save a lot of desk space, allowing you to create more room for your teammates and mouse movements in competitive play. Secondly, it makes navigation faster and lets you access many keys with a single hand.

People play with a tilted keyboard since it makes navigation easier. You can access more keys in less time that help you improve your gaming performance. Also, it saves you lots of space for a mouse and other gaming peripherals.

So here is all you need to know about: why do pro gamer tilt their keyboards? Tilting the keyboard help gamers in many ways, but it also has certain downsides. If you are going to take part in eSports gaming events, you must try all ways through which you can maximize your chances of winning. If you find it stressful and challenging to play on a tilted keyboard, you can find tournament-style tenkeyless and 60% keyboards.