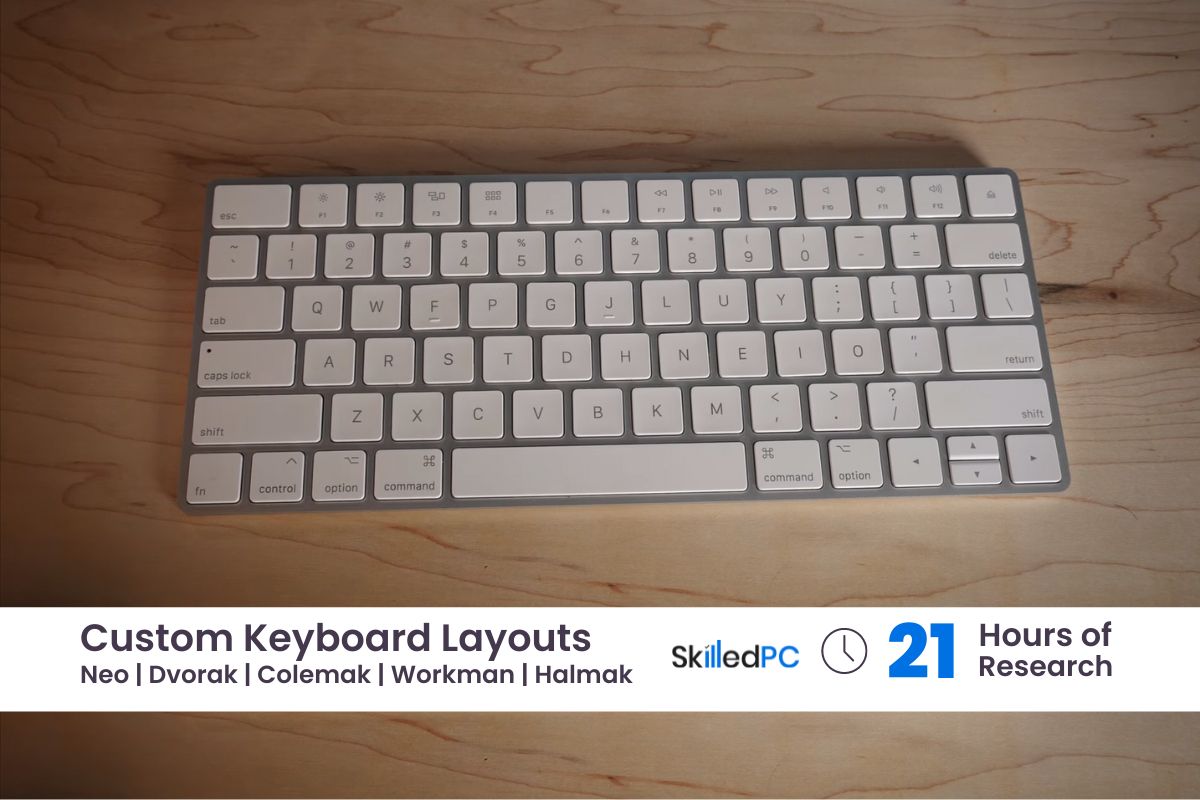 If you’re a computer programmer, you may have to spend many workings hours on your computer. You have to type different symbols and words every day while writing a program. It cannot be accessible on a keyboard with only numbers and letters. Make sure that your keyboard has a suitable layout for this, like one with shapes and symbols. There are many different options available today, and each has its advantages and disadvantages.

Expert says someone who works on a computer all day long types 10,000 characters daily. I think it is a considerable number. If we have to spend such a long time on our computer to type different characters, we should have a custom keyboard layout that can create ease in our daily work, reducing our stress.

QWERTY is just a thing that was already there, and nobody stopped using it, and now we’re kind of stuck with it. It as it’s most likely not going anywhere, and it’s deeply engraved in many tools we use daily. And even the shortcuts are mapped to the chronic keyboard layout.

Also Read: Why do Gamers tilt their keyboards?

You notice that if you press Ctrl z to undo and cut copy paste is on X, C, and V, and you cannot tell me that that is a Mnemonic shortcut. They’re just like this because the place was fitting on the keyboard. But first up, don’t try to switch keyboard layouts just to gain typing speed. That could work for you, but it’s not what happens to most people.

if you seek a more ergonomic typing experience, this might be for you. In that regard, custom layouts can help. You might also want to check out the QMK firmware and Custom Keyboard building, as you have more options to customize your keyboard layout with these. You are free to move every key to specific layers, toggle between the layers, and have a lot of custom functions. I also need to recommend the home row modifiers to you. These are keys on your home road that, when held down, act as a modifier key. This helps me prevent almost all from reaching for keyboard shortcuts as I just use the modifier keys from one side of the keyboard and then press the specific key I want for the shortcut.

On the other hand, that makes all keyboard shortcuts very easily accessible for keyboard layouts. You get a lot of options. It’s basically up to you what you want to optimize and what languages or type of text input you do. Here are some layouts that I think are interesting. I’ll go into each of them right now, but first, you need to know if you’re typing English text, you will be okay with all of them.

1. Neo – Suitable for Programmers and Scientists

I currently use Neo, and it’s optimized for the German language, but it still works very nicely with English. There are some key positions I wanted to swap in that case, but it’s no deal-breaker. It tries to move the most used keys to the Home Row and the center column.

It has a particular focus on special characters and mathematical symbols. It also offers a navigation layer with arrow keys and a num pad.

Dvorak was designed in 1936 by August Dvorak and William Dealey, professors at the University of Washington. They believed that their layout would significantly increase typing speeds and reduce fatigue among typists.

Dvorak is a pretty old layout and is optimized for more usage of the Home row. So it has 70% of its key presses on the home row compared to 30 with just 32%. It also wants to reduce the bottom row usage as it’s the most challenging row to reach.

It switches the primary hand to the right side as that’s the dominant hand for most people and tries to optimize for typing most words with both hands instead of just one, which happens way more often than Qwerty.

Colemak is trying a different approach. It’s trying to update Qwerty to have optimized keys without moving the shortcut keys for cut copy paste.

With Colemak DH, there’s a version where you press fewer keys from the center column and move them to the bottom row, which should reduce the stress on the index fingers.

Workman is focusing on each finger and the capabilities it has to reach on the keyboard, but it’s optimized for the staggered column keyboard, so keep that in mind when using ortholinear keyboards.

It wants to minimize horizontal movement and has a symmetrical design, so each finger has the same amount of usage on both hands while still accounting for finger strength. So let’s use it for the pinky finger.

Now to the problems for gaming, you might need to switch every key for each game, so to prevent that, I tried it, and it’s not fun. I just have a custom layer that just reverts everything to qwerty. That way, I can play games pretending I don’t have a fancy custom keyboard layout on my keyboard.

Also, tap and hold modifiers and any advanced functions of the QMK firmware get in the way of gaming as it’s just not fitting the context of how the game would expect keys to be pressed.

The best solution would be getting a different input device for a specific task like this, for example, the video speed editor from Black magic or a custom build board for the 10th price.

For every other regular program, I just use the standard hotkeys. They’re in different positions, but that doesn’t really matter. You get used to that pretty fast, and it’s just muscle memory that’s playing tricks on you at the start, so don’t get confused with that, and don’t worry, it goes away. It’s okay even for the Vim keys. I just use them wherever they are on my keyboard, and it’s a bit annoying, but it’s not horrible; it still works.

Also, I have the easy-to-reach arrow keys on a specific layer. My main concern with custom keyboard layouts would be that the typing feels super nice, and I would recommend anyone to try it, but you only feel the benefits after getting used to the keyboard layout.

Well, you just moved your hand to your favorite place for it. This is especially nice with the tap dance functions of QMK, as you can keep holding the key to invoke things like copy and paste while it still acts as a standard key when tapped.

I switched to the neo keyboard layout about two years ago. And how does the typing feel, you ask? It’s amazing. After getting used to the keyboard layout, it feels like you’re flying through text. It offers way less resistance while typing as most keys are just below your fingertips, always on the home row, and you just need to press a finger already resting on the correct key for most characters. That’s a feeling I never had with QWERTY at all.

It always felt like I was fighting the keyboard layout, and that was the most magical part about switching keyboard layouts after using Qwerty my whole life. These keyboard layouts have different aspects they want to optimize, but regardless of what you choose, all of them are better than QWERTY. But remember, you will still encounter regular QWERTY keyboards, and there’s no way around that.