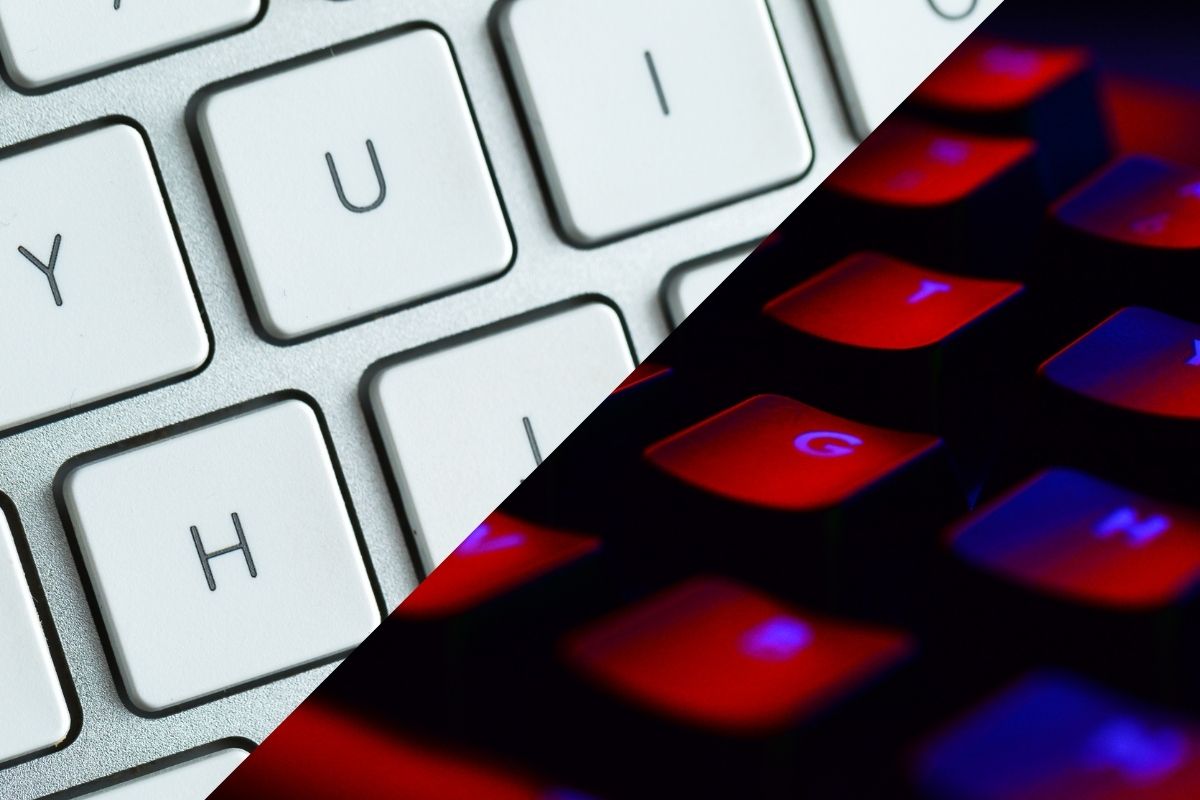 The standard keyboards are integrated with slanting keys that are present together with negligible space. They produce beautiful typing sounds that I particularly like. Furthermore, they are also budget-friendly and can be afforded by the majority. In contrast, the chiclet keyboards are lightweight, easier to clean, and feature widely spaced keys that prevent typing errors, so, if you are also one of those that find it difficult to choose between both, read our comparative review on chiclet keyboard vs. standard keyboard to choose the most suitable option for yourself.

The main difference between a Chiclet and a Standard keyboard is the clean and minimalistic design. Previously standard keyboards were highly popular among consumers; however, they have now been replaced by their Chiclet counterparts because of the latter’s ease of use and minimalist design. Below mentioned are various features that differ among both products and significantly impact their performance efficiency.

First and foremost, design is an essential component of an input device and thus, must be carefully considered while choosing a product for yourself. Coincidentally, both standard and chiclet keyboards feature a similar design with few exceptions.

The Standard keyboard is usually incorporated with two different layers along with a pressure switch located under each key. The membrane sheet is also present in these models and contains conductive traces.

The keyboard works by activating the pressure switch when the key is pressed. This leads to the movement of conductive traces, which enables it to contact the membrane sheet. Thus, leading to the registration of a keystroke.

However, the design and process differ a bit in the Chiclet model. This keyboard version contains an additional upper membrane sheet that improves its overall abilities and offers tactile feedback.

Next up on the list is the overall outlook of both keyboards The Chiclet keyboards have been gaining popularity over the standard ones because of their clean design and ease.

The standard keyboards are those that you usually see with most desktop computers. They have protruding keys that must be pressed strongly to register a key.

As opposed to this, the chiclet keyboard features a compact design with low-lying keys. The keys are small, flat rectangles with round corners. You do not need to exert additional effort while pressing these keys. Furthermore, they are also user-friendly and relatively easier to use.

However, if you are a traditional keyboard user, you might initially find it difficult to adjust to the chiclet keyboard. Apart from this, in terms of key position and other attributes, both models are quite similar and do not display a lot of differences.

As mentioned earlier, key position and placement do not vary a lot in both models. However, you might observe some minor differences in the design of key switches and the placement of large keys in standard keyboards are slightly larger than the chiclet keyboards.

The thick plastic keys integrated into the standard keyboards are mostly found close to each other and placed separately. In addition to this, the keys are characterized by slanting sides with a wide base.

As opposed to this, chiclet keyboards are associated with smaller keys with a clean-cut outlook. They are usually rectangular in shape, and you can see the plastic space between each key as they are spaced from each other.

Another major difference between both models is the key switch. The dome-shaped key switches are present in the standard version, which acts as the upper membrane of the keypad. The key is registered by pressing the key, which leads to pressure exertion on the inner membrane. The process for key registration might vary in chiclet keyboard because of its slightly different design.

The factor that varies significantly among both chiclet and standard keyboards is the ability to generate typing noise. It might be a positive factor or negative depending on the individual preferences.

Some users enjoy typing noise while working and specifically purchase keyboards that produce sound while each key is pressed. At the same time, others might prefer a quiet working environment and might find such devices distracting.

Depending on your preference, you can select the appropriate product for yourself. On average, mechanical/standard keyboards are characterized by high sound generating abilities. However, the ability to generate sound might vary from model to model.

In contrast, chiclet keyboards are relatively quiet and perfect for those fond of a quiet working environment. Their low noise production is attributed to the inclusion of conductive layers under the keys that reduce the sound level when pressed against each other.

Next up on the list is maintenance. Well, you might have guessed by now that Chiclet keyboards take the crown in this regard as well. The reason for this is their user-friendly design that features a lot of empty space between keys. This makes it extremely easy to wipe off the dirt from under and around the keys and enables you to achieve a high level of cleanliness.

In In addition to this, cleaning the chiclet keyboard requires less time as compared to standard keyboards and saves a lot of your time in this regard. Modern chiclet keyboards are also spill-proof in nature and will not get damaged in case of accidental spillage. Thereby relieving you from the concerns of damaging the keyboard while eating or having a sip of your favorite coffee.

On the other hand, standard keyboards require a lot of effort for cleaning and might be difficult to maintain by the majority. In these keyboards, keys are present close to each other with little or no space. Thus, making it difficult to clean the dirt present between the keys. This becomes even more irritating if food crumbs get stuck between keys, and you might have to go through painful procedures to remove the unwanted dirt.

Last but not least, the typing experience is another factor that varies among both models. However, the opinion is objective and might vary from user to user. I personally prefer the chiclet keyboard because of its ergonomic design and minimum key height, which makes it easier to type.

On average, the majority of the consumers report the feasibility and comfort associated with typing on a chiclet keyboard because of its minimalistic design, which does not require additional effort for pressing the key.

In addition to this, these keyboards also offer tactile feedback, which improves your overall typing speed and efficiency.

The tactile feedback might vary among different models of chiclet keyboards depending on the height, curve, and design of the keys. The most popular tactile keyboards are Lenovo Thinkpads, which are highly efficient in nature and stand out among the other products available in the market.

In addition to this, the chiclet keyboards are also associated with a reduction in typos. This is the large key spacing, which decreases the chance of accidentally pressing the wrong key.

In comparison, the standard keyboards feature keys with high height and less spacing which might make it difficult for some to type comfortably. You might have to exert additional effort to register a keystroke, thus, leading to slow typing speed in the long term.

When we talk about gaming, Mechanical keyboards are an excellent way to increase your performance. They allow quick response times, making them perfect in competitive gaming situations where every millisecond counts!

The availability of N-key rollover is an important factor when playing games. Chicklet keyboards don’t have it, which means that they cannot register keystrokes if you simultaneously press several keys on your keyboard without releasing the first key.

Chiclet keyboards are a better choice for casual gamers than membrane keyboards. Pressing the wrong key or missing a shot can cost you in a game, so the space between the chiclet keys will help us stay competitive in today’s modern gaming world.

Membrane keyboards are usually not a good choice for gaming. The keys are close together, making it easy for mistakes or wrong keystrokes. Moreover, we need to push them down to register our keystroke, which doesn’t help in time-sensitive games where every second counts.

Ideally, mechanical keyboards are perfect for typing. Not only do they provide a comfortable typing experience, but they also enable you to type faster than usual and significantly impact your typing speed. This is their specialized design that supports effortless hand movement and contributes to enhanced performance efficiency.

Apart from mechanical keyboards, chiclet keyboards are also suitable for typing and reducing typing errors because of wide key spacing. They also feature minimum key height and do not require a lot of effort to register a keystroke.

There are a lot of similarities and differences between Chiclet and standard keyboards. Overall, they have a similar design with few exceptions.

The chiclet keyboards are small and compact. They also feature minimum key height with keys widely spaced from each other. Thus, they are easier to clean and offer hassle-free maintenance.

On the other hand, the standard keyboards are relatively large in size and are characterized by high thick keys that might be difficult to press. Their keys are also dome-shaped and are placed close to each other. Hence, making it difficult to remove the dirt between the keys.

Yes, chiclet keys are highly popular among users because of their ergonomic design and minimum key height. This makes it extremely easy to press the keys as you do not have to go all the way down to register a keystroke, as in the case of a standard keyboard. In addition to this, these keys feature wide space in between and reduce the chance of typos to a great extent.

Thus, improving your typing experience. However, the increased key spacing might impact your typing speed, as reported by a few consumers.

On the whole, if you are searching for a budget-friendly option with a comfortable typing experience, a chiclet keyboard is our ultimate recommendation.

As mentioned earlier, Chiclet keyboards are integrated with small keys that feature minimum height and are extremely easy to operate. In these keyboards, keys are generally rectangular in shape with the same width from top to bottom.

Furthermore, the keys are spaced far away from each other and feature increased space, making it easier for you to type and clean the keyboard. Because of the rectangular key shape, these keyboards are called Chiclets. The term chiclet has been derived from rectangular chewing gum manufacturing brand called Chiclet.

They are also extremely easy to clean and do not require much effort on the users’ part. In contrast, the standard keyboards are large in size with dome-shaped key switches. Their keys are also present close to each other and are difficult to clean compared to their previously mentioned counterpart. They also feature low tactile feedback and significantly impact your typing speed. So, based on the facts mentioned above, the chiclet keyboards surpass the standard one in terms of design and performance and are highly recommended for daily use.